Professor Shiu’s research program is at the interface of string theory, particle physics, and cosmology. His research aims to uncover the laws of nature at the most fundamental level, and apply the insights so obtained to understand and predict observable phenomena in the domains of high energy physics, astroparticle physics and cosmology. A suite of unsolved problems in physics — such as the enormous hierarchies between the cosmological horizon, electroweak, and Planck scales, the unification of forces and particles, the origin of the universe, and the quantum structure of black holes and cosmological spacetimes — require a unified framework that combines quantum mechanics with general relativity. String theory provides a concrete framework to address these questions while adhering to the rigor of ultraviolet consistency.

His research program adopts a multi-pronged approach: theoretical studies aimed at revealing the principles and properties of string theory, model building that uncovers new mechanisms or restrictions in a consistent quantum theory of gravity, and phenomenological studies aimed at exploring their experimental consequences.  A major thrust of his research program is to connect physics at very high energies to observables in experimentally testable domains. His research efforts have also drawn him to develop mathematical and data science methods.

An up-to-date list of his publications can be found here.

Prof. Shiu’s research is currently supported by the Department of Energy. He gratefully acknowledges its support. Different aspects of his research program are interconnected. Some sample projects are given below:

Quantum Gravity and the Swampland

The rich vacuum structure of string theory gives rise to a huge number of low-energy effective theories (EFTs), often known as the string landscape. However, there is growing evidence that this enormous landscape is exceptional rather than the norm. They are the “crown jewels” in the space of theories: not every low energy theory following the rules of quantum field theory is consistent once gravity is considered at the quantum level. Theories that cannot be completed into quantum gravity in the ultraviolet are said to belong to the Swampland.

In 1905.08261. a program was initiated using extended objects (branes) to probe the consistencies of EFTs coupled to gravity. Infinite families of anomaly-free (super)gravity theories were shown to be in the Swampland.

Is there a physical reason for the difficulty in finding parametrically controlled de Sitter vacua? In 1810.05506, an exponential falloff of the moduli potential at parametrically long distances in field space was linked to the entropy bound. 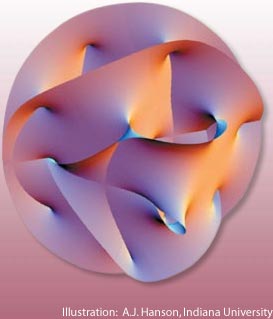 Inflation is sensitive to Planck scale physics, even more so for models that generate detectable gravitational wave signals. This UV sensitivity brings string theory into contact with cosmological observations, and provides a promising route to a test of string theory. His group has contributed to developing models and mechanisms of inflation in string theory. Recent work includes using monodromy (1404.3040, 1607.00037, 1703.09729, 1806.01874) axion mixing and strong dynamics (1503.01015, 1503.02965, 1807.00620, 1807.00888). Inflationary models in string theory would not be complete without moduli stabilization. The observation of an accelerating universe poses new challenges.

While the evidence of dark energy comes from the deep infrared, the problem of the cosmological constant is mainly a question for quantum gravity (see here for a nice discussion). String theory is thus a concrete framework to address the dark energy problem. Most proposed de Sitter scenarios in string theory to date employ either a 4d EFT or a “modular” approach. However, at non-zero 4d gravitational coupling, the various modules (e.g., antibranes, gauginos, warped throat, fluxes, etc) are no longer independent of one another. One must consider the compactification in full: a 4d EFT approach averages out the extra dimensions and obscures potential  incompatibilities. A naive 10d treatment of brane gauginos leads to UV divergences. Only if this UV divergence is properly renormalized can we extract physically meaningful results. In a series of papers (1812.06097, 1902.01410, 2105.11467), a properly renormalized, local 10d brane gaugino action is finally obtained. This provides a key step towards a 10d description of de Sitter construction.

One of the interesting features of de Sitter space is that it has a cosmological event horizon surrounding the observable universe. This horizon can be assigned a temperature and an entropy suggesting a picture where cosmological physics emerges from a more fundamental microscopic theory containing a large number of degrees of freedom. Quantum information theory can be used to probe these microscopic degrees of freedom and characterize their properties.

Professor Shiu’s group has been actively developing this line of research. Recent works include studies of quantum chaos (2002.01326), entanglement entropy in Jackiw-Teitelboim gravity (2104.00006) and information exchange and recovery making use of shockwave geometries (2105.12737). 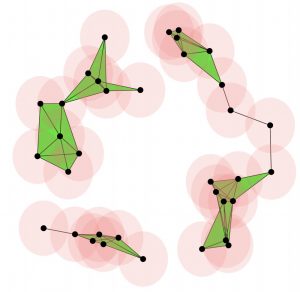 Recent years have witnessed many fruitful exchanges between physics and data science. Prof. Shiu’s work contributes to the Machine Learning Initiative of the Physics Department. Topology provides a rigorous mathematical framework to identify interpretable patterns in noisy high dimensional data. Recent work of his group (2009. 14231), in the context of detecting and classifying phases of matter, further suggests that Topological Data Analysis (TDA) can be integrated into ML approaches to perform both unsupervised and supervised learning tasks. TDA reduces datasets into their summary statistics and yet reveals multi-scale shape information inaccessible by other techniques. The web-like features of the Large Scale Structure (LSS) of the universe make it a paragon for TDA methods. Dark matter tracers and voids have long been used by cosmologists as discerning probes of fundamental physics (e.g., neutrinos, dark energy). However, these observables can only be precisely defined and identified from noisy cosmological data using persistent topology. His group has shown that TDA can provide a competitive detection of non-Gaussianity in the CMB (1712.08159) and LSS (2009.04819) data, and furthermore suggests new observables. The subsampling technique his group developed to speed up TDA computation for cosmological data has wider applications, e.g., in neural science (2102.08623).

Similar methods have been used by his group to uncover structure and correlations in the string theory landscape  (1812.06960). His group further showed in 1907.10072 and 2112.08391 that stochastic optimization methods such as genetic algorithms can speed up the search for phenomenologically optimal models. This opens up the possibility to combine and contrast with reinforcement learning techniques in the study of the vast string theory landscape, as demonstrated in 2111.11466.

Some introduction to this research direction can be found in his book chapter in Progress in Information Geometry (published by Springer), and the NeurIPS conference papers: 2012.00783, 2012.03616.

A main goal of cosmology is to reconstruct the initial inhomogeneities from the observation of matter (such as galaxy surveys) and radiation today. One way to look at this is that the big bang was a giant particle collider, and the observations we have are the outcome of this collision process. This research direction is thus sometimes called Cosmological Collider Physics. Like collider data, non-Gaussian features of these initial inhomogeneities reveal the fundamental interactions governing the early universe. His work in this direction includes the first computation of the non-Gaussianity in general single field inflation (hep-th/0605045). He has continued to design methods to systematically analyze primordial non-Gaussianities by developing techniques in holography and conformal field theories (1211.2157, 1610.01258, 1805.11107, 1908.04572) and topological data analysis (1712.08159, 2009.04819).

Taking this Cosmological Collider view more broadly, he has also studied particle production during inflation (1206.6117, 1405.0346) and oscillon formation after inflation (1707.09841, 1812.09235). These mechanisms can produce observable effects in the CMB, LSS, and gravitational wave detectors, from which we can learn short distance physics inaccessible by colliders.